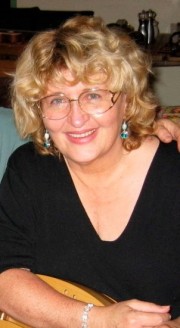 Lois recalls her first meeting with the mountain dulcimer on a hiking trip in the mountains in the mid-'70s: "First I was enchanted by its sound, then its appearance, next by its history." Her journey of learning and musical enrichment has been greatly enhanced by learning most of her music from musicians within old-time, Irish, Cajun and international folk music traditions.

As a musician Lois's versatility and expression shine, and she has helped to introduce with authenticity several different styles of music to the mountain dulcimer's repertoire. Her playing skills have been recognized with several dulcimer championships, including those at the Galax, VA, Mount Airy, NC, and Fiddlers Grove, NC fiddlers conventions, and being named an honorary Kentucky Colonel for her work with the mountain dulcimer.

Lois's first recording, "Vive le Dulcimer," featured international folk music played on the mountain dulcimer, and was a finalist for an "Indie" Award in the World Music category. Her more recent instrumental recordings, "Dulcimer Enchantment" and "Dulcimer Jubilee" dynamically present the versatile sounds of the mountain dulcimer. She was chosen for the recordings "Masters of the Mountain Dulcimer, Volume I" and the new "Masters of the Mountain Dulcimer Play Music for Christmas," and in live performance on "Dulcimer Celebrations!" (The latter three CDs are currently available in Lois's 'Store' on this website.)

Since 1987 Lois has organized mountain dulcimer weeks at the university level, first for 13 years directing the Appalachian State University Dulcimer Playing Workshop, then founding and directing the Western Carolina University Mountain Dulcimer Workshop for 10 years. Concurrently for 17 years, Lois was the Program Coordinator for the Swannanoa Gathering's Dulcimer Week. All this experience led to Lois's founding and independent production of DULCIMERVILLE in 2010. (See Links page for information on Dulcimerville.)

Children are enchanted with the mountain dulcimer, and since 1984 "Miss Lois" has taught over 19,000 of them to play mountain dulcimers in her arts-in-schools residencies. (See "Arts-in-Schools" page of this website.)

. Kentucky Colonel Award was presented to Lois for her work with the mountain dulcimer.

. Lois's album "Vive le Dulcimer!" was a finalist for an "Indie" award in the "World Music" category - National Association of Independent Record Distributors.

The DULCIMER PLAYERS NEWS has written: "Lois Hornbostel enjoys a well-deserved reputation as one of the most influential mountain dulcimer performers, teachers and organizers in the country ... her instruction books and recordings of fiddle tunes, Irish tunes, and dulcimer duets, rounds and ensembles have been an inspiration to an entire generation of dulcimer players."

"Lois is an incredible talent. When I sit and play the music with her I see and hear the passion she has for it." ... Al Berard, Basin Brothers, 1992 Cajun Fiddler of the Year, Cajun Music Association.

"It's rare for someone as gifted as a musician as Lois is, to have such good organizational and interpersonal talents as well."...Bonnie Carol, legendary dulcimer player

"Lois is a very expressive dulcimer player ... The passion and power she puts into "Believe Me, If All Those Endearing Young Charms" ... is sure to move anyone." (Her fiddle tunes) ..."are played with great spirit - sometimes delicate, sometimes more firey, but always with superb control of the dynamic range of this subtle instrument." ... Jerry Rockwell, DIRTY LINEN MAGAZINE

Lois Hornbostel and Hawaiian singer/multi-instrumentalist/songwriter Ehukai Teves present concerts of their many styles of colorful music. For info on their performances and musical workshops they teach visit DulcimerMusic.Net